The earliest idea of a permanent medical supply inside the Roman army can be assumed for the time of the dictatorship Julius Caesars, since during the period of the Roman republic the soldiers usually were dismissed after termination of a campaign. Appropriate evidences are missing, but we know Caesars genius and therefore a step like this is not impossible. Nevertheless it cannot be proofed and thus it remains reserved to his successor Augustus to bring an organized medical supply for the roman army into being. The necessity in addition arose now as a result of the fact that a regular army had been created. Soldiers now were quartered in barracks for longer terms, when the troop was not on campaign, transfered to a different camp or parts of it were detached from the troop body to fulfil certain functions outside the barracks.

It will have been initially quite difficult to obligate the necessary number of trained physicians who could guarantee a sufficient medical supply for the legions. Basically there were several possibilities for the army - similarly this applies to the Roman fleet - of winning medical personnel for the troops:

After a sufficient stock of medical personnel for the army had been created, probably the training of troop physicians took place only within the troops. According to todays knowledge the actual career of the medical personnel in the Roman army is still disputed strongly. It is safe that the medical apprentices (discentes capsariorum) took the lowest level in the medical ranking. The capsarii (ambulance men) took the next higher position, which was characterised in combat by carrying a so-called Capsa, being located in the front lines of the fighting troop. In times of peace the function of a male nurse in the valetudinaria probably came to them. Above it stood the physician soldier (miles medicus), probably in the ranking equal to a miles immunis of the troop, likewise with its salary. Further service ranks are disgussed. It can be assumed that - as this is proven for the fleet - indeed a medicus duplicarius (with double pay) existed also for the service with the legions, or possibly also accordingly a medicus sesquiplicarius (with one and a half times pay). A medicus ordinarius with the pay and the privileges of a centurion probably stood at the upper end of the ranking.

About the efficiency of the military medicine in the early and middle caesarian aera we are not informed in detail, however one can assume that it corresponded to the status of the "scientific" medicine within the civilian area of the time. As the most well-known example Dioscurides may be referred, whos books concerning officinal herbs (1st century AD), remaind the standard literature about pharmaceutics at the universities up to the 16th century. Furthermore the herb-garden of the valetudinarium of Neuss is to mention, whose outstanding status could be reveald by archaeobotanical investigations.

About the equipment of the Roman army surgeons we are informed by the discovery of medical instruments in the fire grave of a Roman legion-physician from the 1st century AD near Bingen. Above all the frequently large similarity with the equipment used still today brings us to astonishment.

Medicine was practised in times of peace in the valetudinaria (military hospitals) of larger camps, whereby such installations could be proven in most more exactly excavated legion-camps. A valetudinarium characterizes itself frequently by a special arrangement of the premises, whereby 2 approx. 18 square meter romms are followed by a smaller, approx. 4-6 square meter large room, which forms a so-called 3-room-kombination with the first ones. A more or less large number of these groups was build to both sides of a rectangular corridor, enclosing in the center of the building a larger yard with a column-passageway (peristyl). 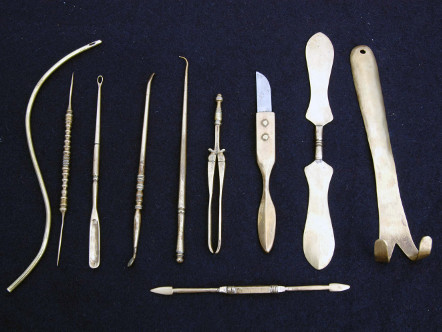