The religion science ranks the acient cult of Mithras among the so-called eastern myths and redemption religions. Although within many parts still puzzlingly, research in the 90's has enabled an illuminating view of the origin of this religion and their central content. On the basis of old-Iranian and Indian myths of the 7th pre-Christian century around the God Mit(h)ra, one believed for a long time in a coherent tradition into hellenistic time. The old myths describe origin and acts of the God, which fills out the function of a guarantor and an intermediary of agreements in good faith, which his "speaking name" determines with the meaning of "contract". Thus the God developed to the intermediary between humans and divine sphere, in the long run also to the fighter for justice and property in general. Actually these myths (although substantially modifies by philosophical ideas of Platonic coinage) flowed in differentiated form into the hellenistic-roman Mithras religion.

Exemplarily the frequently represented birth Mithras' out from rock is picked: Many old mythologic conceptions see the sky as a stone vault. Thus the old-Persian word means skies at the same time for stone! The rock is also synonym for the fixed earth and creates Mithras already by its birth a connection between skies and earth. Usually the ball held in his hands by the God for the moment of the birth symbolizes not only the globe but additionally the cosmos with its spheres, how the antiquity cosmology postulated it. A further aspect are the - iconographic never missing - two companions of Mithras, the herdsmen Cautes and Cautopates, who present with the birth according to the tradition. They are represented with one lowered torch and one directed upward and symbolize (as an aspect under others) birth and death, day and night. The Mithras standing between them becomes in this way strong center of the life, intermediary between start and end, center of the time. The birthday of the God was committed logically on the 25th of december, the third day after the winter sun turn, the beginning of the again reviving sun, which is between the end and the beginning of the years. Thus Mithras embodied beside the spatially universal divinity also a comparable temporal component.

The central problem of the brought scientific interpretation attempts of the cult was however during the central and always recurring representation of a bull-killing by Mithras - the "Tauroktonie". But the old eastern texts offered no assertion, because there were no such connection between Mithras and a bull. The motive of the ritual bull-killing is a very old motive, perhaps even originating from neolithic time, a picture provided with so complex interweaved symbol contents that it leds too far to show all this. Only the most fundamental aspect should be marked out: With the bull it concerns the holy bull occurring in many myths connected with a mother goddess, symbol for vitality and strength, whose cyclic dying creates always new life.

But from where came the connection from bull-killing and Mithras? The animals and articles appearing in connection with the bull-killing on the cult-reliefs, whose meaning was always disputed, brought the solution, which led however now to a scientifically recognized interpretation of the internal secret of the Mithras religion. The mentioned myths formed an important constituent of the cult, for not however its core. This was situated in an astronomical observation, which was felt as so profound and important that from it a religious movement developed. The Greek astronomer Hipparchos discovered in the 2nd pre-Christian century by remarkably precise measurement from asterisk positions that the axis of the earth extended fictitiously into the sky executes a small circular movement. Thus the apparent points of pole of this axle in the sky shift in the process of centuries and for the terrestrial viewer changes the position of the fictitious celestial equator in relation to the constant position of the ecliptic (apparent level of the planet and sun movement). Consequence is the slow shift of the intersections of celestial equator and ecliptic. The two intersections (spring and autumn equinoxes) move through the constellations of the ecliptic. Thus the day of the spring equinox was situated around 4000 v.Chr. still in the constellation bull. In our days it moves even in the constellation of the aquarius - the beginning of the "Age og Aquarius" praised by the astrologers! 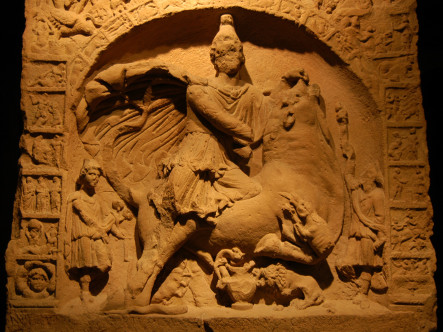 This today "precession" named phenomenon contradicted the theory of the unchangeableness of the cosmos. It had to probably to exist an unknown God, whose cosmic power expressed itself for the movement of the world axle in so immeasurable periods that its existence had remained hidden for humans by the shortness of their lifetime so far. Probably on the basis of the philosophical school in Tarsus - neighbouring in the geographical habitat of Hipparchos and intimate to the Stoizism - the cult of this hidden God justified itself: Apart from all the mythic-religious-ethical implications and aspects of welfare (for instance the question of the creation of new life by killing of innocent existence and thus consciously on oneself taken moral debt) the bull-killing is above all symbol of the "killing" of the bull age by moving the world axle on - with the impact of the dolches into the neck of the holy bull Mithras becomes the true cosmocrator, is his action the character of the beginning of a new world age! An idea, to which the Stoizism was situated very close with his conception of "world fires" in enormous temporal distances, which let go everything to ruin so that it can arise again new and purely! 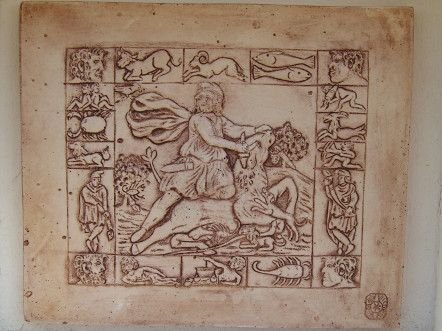 If one lists the constellations being situated between the constellations bull and scorpio (corresponding autumn equinox) along the celestial equator, these are met as symbol on the typical Mithras cult-pictures of the bull-killing - an encoding of the astronomical discovery! Cautes with his upright torch symbolizes thereby the day of spring -, Cautopates with the lowered flame that of the autumn equinox! The obvious question about the reasons for equating an insignificant eastern God as Mithras with this enormous power, points likewise to the city Tarsus and lets a cult emergence assume there. The divine legend hero and dragon-killer Perseus were considered as a founder of the city. His celestrial constellation is figurativy spoken over that of the bull, kneels symbolful on this! Perseus divided numerous iconographic attributes with Mithras like Persian clothes or phrygic cap. Which was situated more near to identify the Perseus constellation visible in the sky as an allegoric symbol of the unknown and new God which had to be kept secret. For additional encoding and because of the outwardly identical appearance it was called Mithras. So the true background was to be detected for ignorant ones in no case!

According to literary and archaeological documents the cult may have developed itself in the 2nd - 1st pre-Christian century in Asia minor. Discoveries of inscriptions in the central empire as for instance Rome occupy a larger spreading only starting from the end of the 1st Century. A clear increase in soil monuments and inscriptions originates from the 2nd Century and finds its high point in the 3rd Century. Even at the imperial yard there was a sanctuary, a so-called "Mithraeum". Only with the ascent of the Christianity as state religion began the descent of the Mithras cult, which probably finally ended with the prohibition of all pagan cults among emperors Theodosius in 391.

On the basis of archaeology and texts like the "papyrus of Turin" the cult happening can be reconstructed at least in fundamentals.

According to the Platonic theaching of soul, the human soul falls of the eternal fixed star sphere down into the cycle of coming and passing and mixes itself during this fall down on earth through the seven cosmic spheres with impure subject, takes up material feelings such as pain, fear, longing etc., until it in the long run even connects itself with subject, the body. If it stands the trail to free itself in the terrestrial life from all this, it is able to get through the seven spheres again into the divine after death. According to this conception in the Mithras cult existed seven inauguration degrees: raven - chrysalis - soldier - lion - Persian - sun walker - father (= priest and chief of the respective community). Each of these degrees one of the asterisk spheres was assigned, so for instance to the raven as lowest degree the planet sphere merkur. The community members (only men could be inaugurated) hoped to be able to rise up through the seven levels and to clean their soul by progressive instruction and mental realization, connected with stoic coined and fair way of life. If the community priest regarded a member as worthy, then he received the next higher level, which was lent in a mystic ceremony. Probably only in the last levels the existence of the "secret God" was uncovered to the believers.

The community members met regularly to the service, which took place in symbolic adjustment of the origin myths of the Mithras in a "cave", usually premises which were situated deeply. In particular the common cult meals taking place at it created violent Christian reactions, because they saw therein a blasphemy of the communion. The religious communities were quite small according the number of their respective members. If the number of members exceeded the available space in the cult-rooms, a section separated itself and formed a new community. A superordinate structure as for instance at the Christian church has not existed, even if we can assume, the head of the community of Rome could have had a central position.

The great attraction of the religion was situated apart from the knowledge of the unknown secret God in the constant demand for fair life in the fight against bad and evil, which was particularly for soldiers of substantial importance, who saw in it a legitimacy of their fighting against the enemies of the fair arranged empire. In the long run its similarity to Christianity became the undoing to this wide-spread and very moral religion. This is prooved especially by the numerous cult pictures smashed to smallest pieces by Christian destoyers. 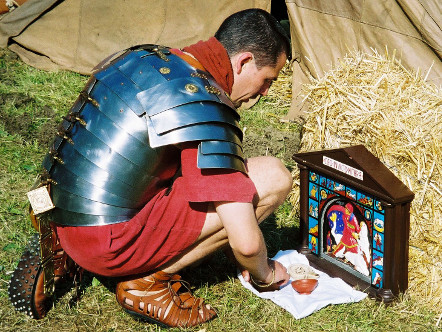 You are here: Home > Military > Cult of Mithras